I'm sitting here typing these words, knowing full well that I didn't decide to write them. I'm witnessing their creation much like you are reading them, but it feels like I'm deciding what they should be. It's a weird thing to draw one's attention to and talk about.

I don't know many people explicitly living with this frame of mind, so I thought I'd share what it's like.

In these instances, nothing is different from your normal decision making process. Your narrator just took a break. Decisions were made as they always are, but the stories about why any of it was happening stopped.

Our conventional belief in free will is like believing that in a basketball game, the announcer is controlling the action on the court.

There are many documented observations that inform and support this view. Studies show people make decisions before they are aware of making them, for example. The one that turned the light on for me, however, was a particular observation of a split-brained patient's behavior.

Patients who have had the brain hemispheres separated for medical reasons (by severing the connective fibers between them) behave in some astounding ways. Their friends and family usually don't notice any extreme differences in behavior or demeanor, but experiments show that the patient behaves as if there are now two distinct personalities sharing a body, no longer a single consciousness. Each with their own preferences, goals, and feelings.

In such cases you can secretly tell the right side of the brain to get a drink of water. This means the left side is unaware of the directive (this is done with instructions that only the right hemisphere can see). The patient gets up to get a drink of water. Now when you ask the patient why they just did that, you're speaking with the left brain, which controls the mouth and speech of the body. The left side knows nothing of the instructions. Even so, the left-brain interpreter will make up a story about how it was thirsty, or some other rationalization.

But it's not just split-brain patients, this is what every one of us is doing every second of the day. Things happen and we write a story about a single agent, "I", living in our body. In this story, the agent is the same from day to day, second to second, making the decisions that it thinks will bring it the most happiness.

Our idea of ourselves and why we do what we do is like staring at an ever-morphing, blotchy image and tricking ourselves into seeing a bunny. If it starts to look more like a frog, then we say it's obviously a frog and its always been a frog, we just weren't looking at it right.

If you're like me, you've probably stopped reading. I wouldn't read a post like this :P But for the rest of you, let's get to the benefit of taking the red pill.

The benefit of moving past our inaccurate concept is relief. And empathy. Empathy for yourself as well as others. We're all trapped in this thing together. No one is getting away with anything.

Letting go of free will changes the deepest story we tell ourselves about why we're here and what it all means. It's understanding that we are completely shaped by Nature and Nurture, and nothing else. However you're feeling about these words, or whatever you're thinking about what I'm saying, you didn't decide to think and feel those things. So how can you be responsible for the decisions that stem from them?

And in that sense, there's no real "you" at all. There is only a story that emerges from a complex froth of biological processes we don't fully understand.

So if you punch me in the face, will I still get mad? Of course. Just because I believe in this theory doesn't make my own thoughts and feelings go away. But it helps get out of unproductive and unpleasant thought patterns more quickly.

After I recover from the punching, instead of holding a grudge, I can more easily move on to empathy for someone who feels like they need to physically attack someone else to prove a point about free will. Whatever genes and experiences crafted someone like that, they are only doing what they have to do. They are trapped in this machine with me, and like me, their gears are turning in the only way they can.

I still feel bad when I hurt people. Of course I do. I still want to minimize everyone's suffering, even people I don't know or people I despise. So if I do something that increases suffering for anyone, I feel bad and ashamed. I pledge to do better next time. I update my behavior patterns to try and avoid that outcome in the future. That is how my gear turns. I don't feel proud about that, I feel lucky to be crafted in this particular way.

Yes, I can imagine behaving differently and the better world that it would've created if I had. That's part of learning and adapting. But I don't actually think that I could have done it differently, in the cosmic sense.

I behaved poorly, people got hurt, and then I had the thought that I shouldn't have done that. Upon reflection I create an imaginary world where I didn't do the bad thing. Having envisioned the alternate reality, I can better attenuate future actions to avoid that feeling.

So as much as it sucks to have hurt people, I don't need to pile on with stories about the life that could've been. Or that there is a soul inside me that could've behaved differently, but didn't for moral reasons.

Of course this is all assuming that my body, mind, and neural state allow me to prevent the negative thoughts. If my body decides that I'm going to descend into a never ending spiral of shame, no mental framework is going to get me out of it.

Me writing this post and investigating my own mind to begin with, are all just progressions on a path that was set in motion by currently unknowable systems, well before I was born1. Any change of course in my life that results from believing new things was brought about by forces beyond my control, not from some epiphany authored by my unchanging-self.

So far I'm lucky to be witnessing this particular life that I'm having, but I could imagine it turning into a nightmare in any number of ways. And if that happens, hopefully my suffering will be less because I know it could not have been different.

This view makes it pointless to believe in heaven or hell. How can I be judged on my decisions if I'm just doing what I was created to do? Show me the moment in my life where I could've done something other than what I did, and explain to me how that's the case.

Does this mean we shouldn't punish murderers?

A lack of free will does not absolve anyone from the consequences of their actions, obviously. Bad actors should still be punished. Knowing there will be consequences for their actions makes people behave differently. Our current laws create consequences that generally make people consider the wellbeing of others. As it should, because we live in a world where actions have consequences and people can be hurt, no matter if anyone believes in free will or not.

Letting go of free will can, however, create more effective ways of shaping behavior to get more of what we collectively want and less of what we don't.

Let's say there's a serial killer who we catch and put on trial. As we think about what it must have been like to be his victims, and the ongoing horror that their families face. The thought of retribution becomes very satisfying.

Whether you're a capital punishment supporter or not, when the ruling comes down, execution or life in prison, we consider justice to be done. Let this be a warning to any other evil people considering doing their evil things. And let this deranged person understand the giant mistake they've made.

But what if the serial killer's actions were caused by a giant brain tumor pressing on the part of the brain that controls empathy or aggression? Like in the case of Charles Whitman, the tower shooter. What if those people could've been saved if his tumor had been detected and removed? Or what about people who suddenly become pedophiles after growing a brain tumor, and stop after the tumor is removed? Are these people evil?

If we go with the evil story, then we feel good about ourselves for locking away these villains and serving justice. But shouldn't we be more concerned about the fact that brain tumors can create murderous or predatory people?

There Are Good People and Bad People, right?

Subscribing to a story of evil precludes investigating root causes and therefore possibly increasing the amount of "evil" acts and terrible human behavior. If we let go of the evil story – the free will story – then we can discover and prevent the precursors to violent acts.

I've come to understand that we all – figuratively – have some type of tumor like this. We were all born with certain brain chemistry, certain traits and environments that make us into people who make certain decisions. We were never consulted along the way. If good and evil are just physical pressure on different parts of the brain, we didn't decide how those pressures were allocated.

Free will leads to simplistic, uncurious explanations of behavior. Why do people do bad things? Well, there are good people and there are bad people. The bad people decided to be bad so they need to be punished. Case closed.

If we do away with free will, we are obligated to investigate cause and effect and learn new things. Why do people do bad things? Because their genes and experiences shape them to make those decisions, and their brains are configured in a certain way. Well then, is there anything we can change in people's genes or experiences that will prevent them from wanting to make bad decisions? Now we have a line of inquiry that can really improve everyone's world.

I have to say, I feel like my life is much better this way. As someone who naturally feels guilty and ashamed, this has allowed me some distance from those feelings to better work through them. I've also had depression most of my life and I think getting on board with this sooner would've helped.

Why not try it on and see how it feels? Mindfulness practice can help witness the thoughts and feelings arise out of nowhere, which helps make it understandable. It took quite a while of hearing Sam Harris argue for this idea before it sank in for me, so I know personally that it takes some time to fully let go of the illusion.

If you do, let me know how it goes. If you think I'm wrong, please send me a message and explain it to me.

1: This is actually true even if the universe turns out to be non-deterministic. Even if things would be different if somehow they were re-run, I would have no agency in whatever happens the second time, just as I didn't have any agency in what happened the first time. The point is not that the future is predetermined, but that I have no control in the deepest sense, over what I do. 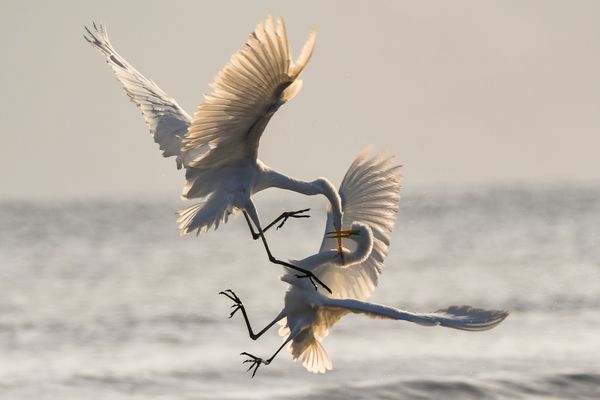 As far as Evolution is concerned, we're all just adaptation machines, doing the work of finding the best answers for its algorithm.